It Might not have been Heaven, but it was Magical 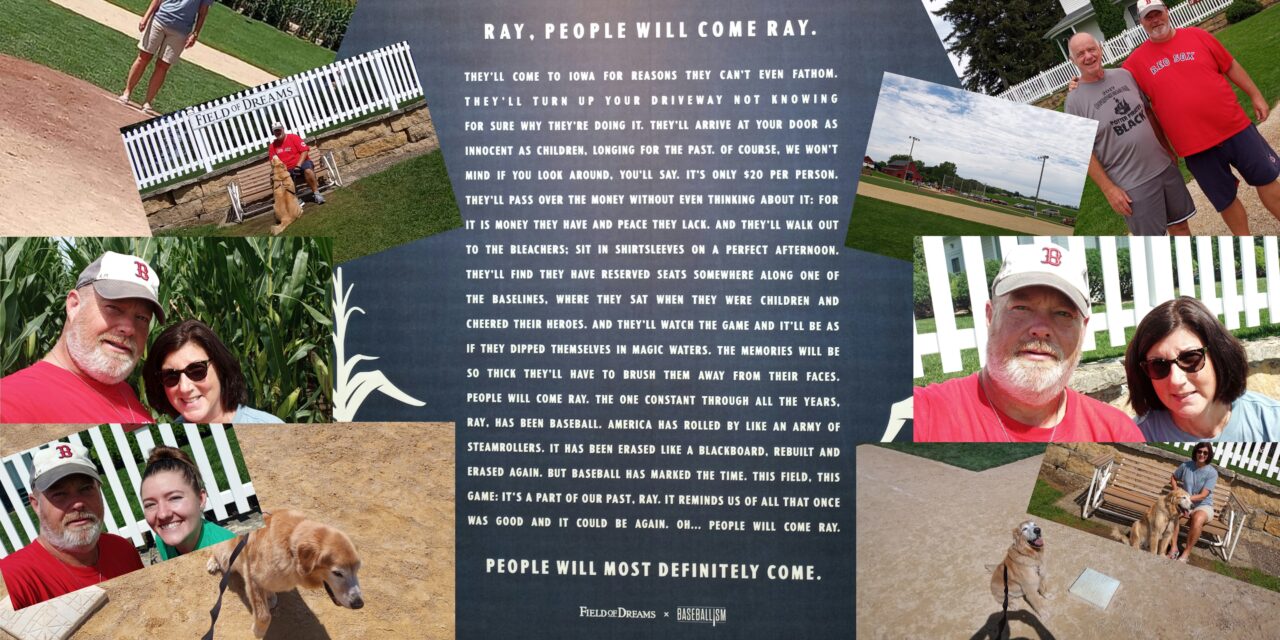 We went to Dyersville, Iowa last week to see The Field of Dreams Movie Site.

It might not have been heaven, but it sure was magical.

Anyone who knows me, knows that baseball is in my blood, so to get to visit the Field of Dreams site was pretty exciting for me to say the least.

Ever since I can remember, baseball has been a part of my life.  For me, it was always about more than just the game itself.  It was the entire experience.  From seeing a perfectly groomed field before the game begins, the smell of the fresh cut grass, the sight of the perfectly straight white lines which have been applied with mastery.  Those lines and their perfect 90-degree angles.  Their contrast on the brown infield dirt and bright green outfield grass.  It is truly about as perfect of a scene that a human could create.

The hustle and bustle of the crowd, the smell of the hot dogs, peanuts, and popcorn.  All of it combined makes it so much more than just a game for me.

That is what makes this field so special as well.  The movie itself was able to do something that few movies could ever do.  It perfectly described the feelings that the game of baseball can give to boys and girls, men and women, and professionals and amateurs alike.

In the movie, when Ray Liotta, playing Shoeless Joe Jackson, made this statement…

“The sounds, the smells. Did you ever hold a ball or a glove to your face?”

Every true baseball fan knew exactly what he was talking about.  Everyone who has ever played the game of baseball can relate to holding a glove up to your face and taking in a deep breath threw your nose.

Just like how anyone who ever watched the movie got chills when James Earl Jones, who was playing Terence Mann in the movie, muttered these iconic words…

“Ray. People will come, Ray. They’ll come to Iowa for reasons they can’t even fathom. They’ll turn up your driveway not knowing for sure why they’re doing it. They’ll arrive at your door as innocent as children, longing for the past. ‘Of course, we won’t mind if you look around’, you’ll say, ‘It’s only $20 per person’. They’ll pass over the money without even thinking about it: for it is money they have and peace they lack. And they’ll walk out to the bleachers; sit in shirtsleeves on a perfect afternoon.

“They’ll find they have reserved seats somewhere along one of the baselines, where they sat when they were children and cheered their heroes. And they’ll watch the game and it’ll be as if they dipped themselves in magic waters. The memories will be so thick they’ll have to brush them away from their faces. People will come Ray.

“The one constant through all the years, Ray, has been baseball. America has rolled by like an army of steamrollers. It has been erased like a blackboard, rebuilt and erased again. But baseball has marked the time. This field, this game: it’s a part of our past, Ray. It reminds us of all that once was good and that could be again. Oh…people will come Ray. People will most definitely come.”

Capturing those things in a movie is something special, but could that same magic actually be captured just by visiting the field?  The answer, emphatically is, “Yes!”

We were there on a Wednesday afternoon, and the place was packed.  As soon as we got there, we saw our good friends Jeff and Sheryl Potter who were traveling from Maryland to Minnesota to participate in a hike to raise money for CureSearch.

Jeff and I are somewhat of kindred spirits.  We’re fellow authors and both are absolute baseball junkies.  And we’re baseball junkies in the fact that we’re baseball purists.  We’ve both been involved with youth baseball for a long time and have seen so many things that are going on that hurt the game.  Yet, we still love the game and have worked tirelessly to teach kids the incredible life lessons that the game can teach.  It’s never been just about the wins and losses for Jeff and I, it was always about the life lessons and relationships that we had built with our players that lasted far longer than our time with them on the field.   We have done two podcasts together, one back in May of 2020 and another one this past June.  We are cut from the same cloth.

This meeting was somewhat by chance, but we did tweak it a little bit just to make sure that we’d catch each other.  The weekend prior, Jeff had posted on Facebook that they’d be stopping at the site, I knew that it was the same week that we were going to be going through as well, so we just touched base to make sure that we would both get there at the same time, and we did.  That alone was pretty magical.

Sandy and I were running late, so Jeff and Sheryl arrived at the site a little bit before us.  Once we arrived, Jeff and I were pretty much like two kids in a candy store, or more accurately, two kids on a baseball field.  It didn’t matter that we were both grandparents now, the field brought out the kid in us, just as the movie did.

Again, that was the magic at work.

Even Sandy and Sheryl, who are novice baseball fans, could feel the magic.

Jeff and Sheryl had seen a couple renew the wedding vows before we had arrived.

That was the magic at work.

Jeff and Sheryl had another four hours to drive that day, so they headed out, while Sandy and I stuck around.

I had a podcast scheduled with Jenna Nimtz, who is the manager of the Baseballism store that is now located at the site, so Sandy and I walked into the cornfield and around the field until she had arrived for her shift.  Again, as we walked around, you could feel the magic in the air.  Boys and girls, fathers and sons, mothers and daughters, everyone was smiling.

Jenna and I had connected on Instagram a few months ago.  One of the objectives of this journey for Sandy and I is to tell people’s stories, so I had reached out to her to see if she would be interested in doing a podcast with me.

She agreed, and it was again, magical.

Here were two individuals who had never met in person, yet the game, the field, the magic, immediately gave us a personal connection.  That is what the magic of the game and the magic of the field is all about.  Two people, years and years apart in age, completely different backgrounds, yet that one commonality of baseball connected us, just like Terence Mann said in the movie, “The one constant through all the years, Ray, has been baseball.”

Jenna spoke about her favorite moment of the Major League Baseball game that was played at the location a few weeks prior to us getting there.  Amazingly, or perhaps not so much, it was something that happened when no cameras were rolling.  She talked about seeing the reaction of the likes of Aaron Judge and the other big leaguers that were there when they walked onto the movie site field.  Her eyes lit up when she talked about the feeling that she got when she saw these larger-than-life professional athletes transform into little boys again right before her eyes.

It was the magic of the field.

In that moment, every one of those big-league players was no different in their reactions than what Jeff Potter and myself were like when we first walked onto that field.

That is the true magic of the place, everyone who visits, regardless of their background or what the highest level of the game was that they had ever played at, gets the same childlike feeling when they step on that field.

Even those who never played the game can feel the magic.

When I asked her my final question, you could tell that I gave her an opportunity to talk about something very special that her company does and gave her an chance to reflect on what it meant to her to be part of something bigger than herself.

Maybe it was just more of the magic.

Sandy on the pitcher’s mound.

After the podcast, Sandy and I took Youk for a stroll around the field as well. 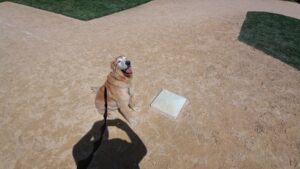 Youk at first base.

Obviously, this wasn’t Youk’s first time on a baseball field, but even he could tell that there was something different about this place.

As we were getting ready to leave, I heard someone call my name, much to my amazement, it was Chris Kearney, one of the umpires that used to work for my old organization.

It was certainly magic.

As we stood there and talked, we realized that he and his friend, Kim Wolfe had both graduated from high school with Sandy!

Again, what were the chances, it could only be magic.

So, although it’s definitely not heaven, there is certainly something magical about that field that was cut into the Iowa corn so many years ago. 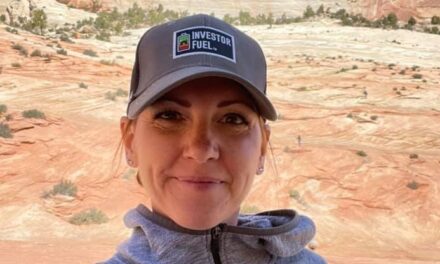 April Crossley – Life Should be an Experience 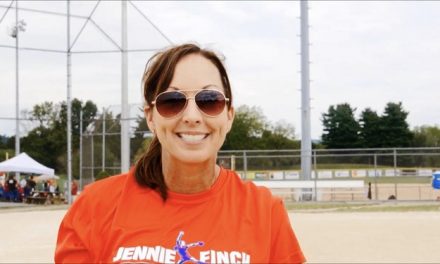 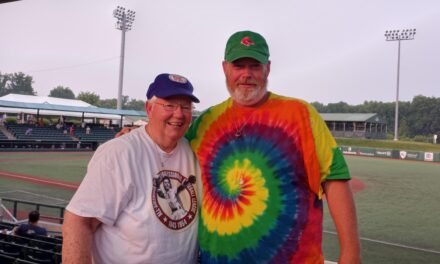 Merrie Fidler – A Master’s Thesis Leads to so much more 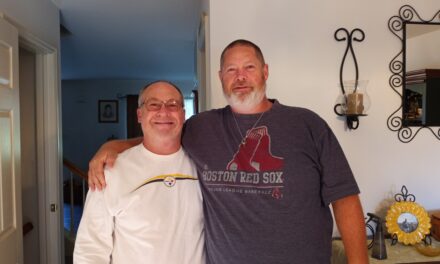