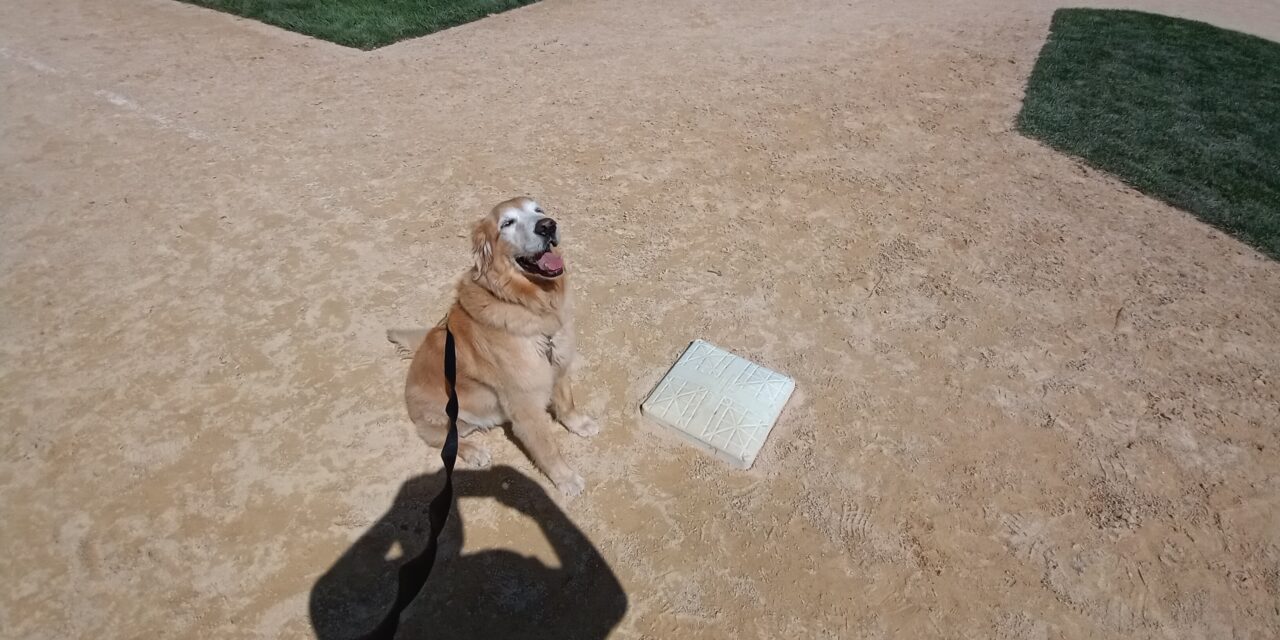 I was sad to leave Wisconsin, mainly because I really love the cheese.

But it seemed like mommy and daddy had a pretty good supply for us for at least a little while.  Mommy that it was too much, daddy didn’t think that it was near enough, but I was ok with our cheese supply.

From Wisconsin, we went back south into Iowa.  We were kind of doing some zig-zag sort of route on this trip for sure.  I mean we started in Pennsylvania, then we were in West Virginia for just a little bit and then went to Chillicothe, Ohio, and then back up north to Kent State and Cleveland.  After that, we went up into Michigan and down again into Indiana and then we did a little U-shaped thing through Chicago and Rockford, Illinois before heading up north again into Wisconsin.

Now, here we were heading south again into Iowa and then we’d be going back north into Minnesota.  I was back to thinking that daddy needed a new compass again, because we were going all kinds of different directions now!

The story of how the Hawkeye State got its name changes slightly depending on who is telling it. However, most sources agree on the basic underlying facts. There are two men largely responsible for the adoption of the Hawkeye nickname: David Rorer (a judge) and James G. Edwards (a newspaperman).

As (one version of) the story goes, in the early 1830s, Rorer was concerned that Iowa would be given an unflattering label by its regional neighbors. He thought it would be better if Iowa created its own nickname. He was determined to support the process, and he enlisted his friend James Edwards to help popularize a good state nickname.

It’s thought that Rorer had two inspirations for his chosen name. He loved literature, and it’s almost certain he knew of the character Hawkeye in The Last of the Mohicans (one of the most popular novels at the time). However, Rorer probably also chose the name to honor a well-known Iowan historical figure: Black Hawk (Ma-ka-tai-me-she-kia-kiak). This Native American warrior of the Sauk tribe was famous in the region for participating in the Black Hawk War of 1832. Siding with the British, Black Hawk fought against the U.S. to push American settlers away from Sauk territory.

Many sources say that Rorer and Edwards agreed that choosing “Hawkeye” as the state’s nickname would honor Black Hawk and be an easy sell thanks to The Last of the Mohicans. Both men worked hard to get Iowa’s citizens to adopt the name. Edwards moved to Burlington and renamed his newspaper The Hawk-Eye.

It’s tough searching for things on the internet with my paws, so I hope that you found that information that I just gave you interesting.  It took me a lot of time to find that.

Anyway, enough about the state’s nickname.  Daddy had one thing in mind when we got into Iowa and it had nothing to do with it being called the Hawkeye State.  He really wanted to go to the Field of Dreams movie site.  My daddy loves that movie.  He has watched it so many times since I was a puppy.  He knows a lot of the lines and no matter how many times he watches it, he still gets a little choked up at the end. 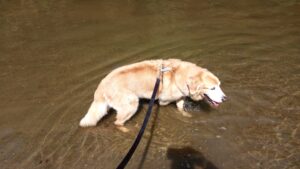 I love when I get to go swimming.

Before we went to the Field of Dreams site though, we stayed at a campground just about 20 minutes away from the Field of Dreams.  It was called Riverside Campground, I guess they named it that because it was next to a river.  I didn’t look that up on the internet, but I think that it’s a pretty good guess.  I got to go swimming in that river the two of the days that we were there and it was really fun!  It was really hot in Iowa when we were there, so I was really happy that I got to go swimming in that river.  And the flies, oh my goodness, Iowa flies are like no other fly that I ever tried to catch with my mouth.  Those things are huge!  Not only are they huge, but there are millions of those things flying around everywhere!  Some of them even bite.  I didn’t like the Iowa flies at all.

We also had a really bad thunderstorm come the campground in Iowa, but I just slept through it.  The RV was shaking a lot, but I didn’t mind, I just took a nap.

Once we got to the Field of Dreams, mommy and daddy met some friends there.  Jeff and Sheryl Potter were there all the way from Maryland.  Jeff is like daddy when it comes to baseball.  He absolutely loves the game of baseball and he coaches kids just like daddy used to.  Daddy says that he and Jeff have the same philosophy when it comes to coaching baseball.  Daddy says that for he and Jeff, it’s more about teaching life lessons than it is about winning and losing.

Daddy also did one of his podcasts with Jenna from the Baseballism store while we there.  Daddy likes helping to tell the stories of cool people like Jenna.

Just when we were ready to leave, some man called out daddy’s name and he it was a guy that used to umpire baseball games for my daddy.  After they were talking for a while, mommy realized that she graduated high school with that man, whose name was Chris and his friend Kim.  At that point, I was just like, “Wow, this place is magical, what are the chances of mommy and daddy seeing all these people that they know so far away from our old home?”  My Puppy mind was blown.

After we left the Field of Dreams site, we started to drive to Minnesota.  We stopped and ate dinner and got gas at a Pilot and then drove to the Minnesota Welcome Center to sleep, I guess there weren’t any Cracker Barrels around.

I do have to admit that this welcome center was very cool though.  They had a really neat little walking trail that went through the woods that me and mommy and daddy walked on in the morning.  I really liked that.

The Minnesota license plates say “10,000 Lakes” on it, so while I was searching the Buckeye State stuff, I figured that I’d search this 10,000 Lake thing as well.

As it turns out, this what I found:

Minnesota’s official nickname comes from its French state motto, adopted in 1861: l’étoile du nord meaning, “the star of the north.” Another unofficial nickname is the Land of 10,000 Lakes because, well, Minnesota has thousands of lakes—11,842 to be exact!

Me personally, I would have put 11,842 Lakes on the license plate then, I mean why short change yourself, right?

We spent three days in Minnesota and they were at three very unique places.

They were all Harvest Hosts locations.  Harvest Hosts is a thing that mommy and daddy signed up for where we can stay in really neat places like farms and wineries and museums.  I like when we stay at Harvest Hosts spots.

The first one was called the Organic Aronia Berry Farm.  None of us ever heard of an Aronia Berry before, but mommy and daddy sure did pick a lot of them.  The nice lady that ran the farm was named Beth and she gave mommy and daddy some home-made Aronia Berry coffee cake.  Mommy and daddy both said that it was delicious, but I wouldn’t know because neither of them shared it with me.  Here I thought that I had them trained better than that by now.

The next place that we went to was the coolest though.  It was called, Little Moran Creek.

On our way there though, it was starting to get really dark and gloomy.  Just like that we saw a Camping World on the side of the road, so mommy and daddy decided to pull in there and wait for the storm to pass, so that’s what we did.

I’m allowed to go into the Camping World stores, so it really worked out perfectly for us.  As soon as we went inside the store, all of the employees and some of the customers started getting all googly eyed over me and telling me how cute I was, and smiling and petting me.  Some of them gave me treats.  I mean I was pretty much the star of the show.  There was another dog in there, but he wasn’t nearly as cool as me.  I’d bark if I saw him in the store, so me and daddy kept walking to areas where that other dog wasn’t.  Sometimes daddy would tell me that I had a big mouth and that I was embarrassing him, but I really didn’t pay much attention to him when he said that.  Sometimes I just have to be me.

After the storm passed, me and mommy and daddy hopped back into the house on wheels and started our way up to Little Moran Creek again.  We had to wait a little bit for the owner, Steve to get there, but when he did, he was really nice.  Of course, he liked me.  I mean, who doesn’t?  He petted me a lot and I made him smile. 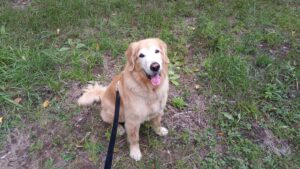 I’m always so happy when I get to walk on a neat trail.

There was a really neat trail there that we walked on.  We got a little wet because it started to rain again, but that never bothers me.

That night mommy and daddy went down to his lodge and he made them dinner.  They said it was really good, although mommy ate more than daddy because daddy doesn’t like shrimp, but they didn’t bring any left-overs back to the house on wheels for me.  I guess that it’s back to the drawing board to get these humans trained again.  They had been doing so good there for a while.

The next day, we headed off to North Dakota, I can’t wait to tell you about that! 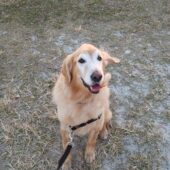 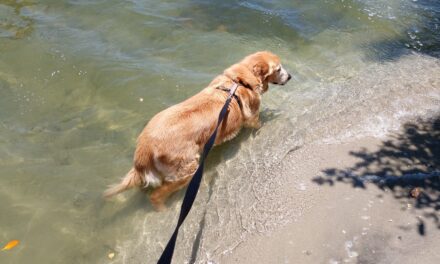 Out and Back in One Day 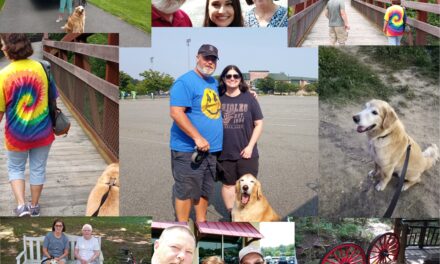 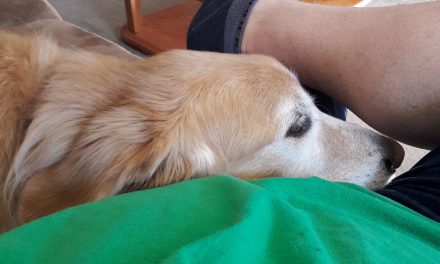 Another Lesson from Youkilis, the Golden Retriever 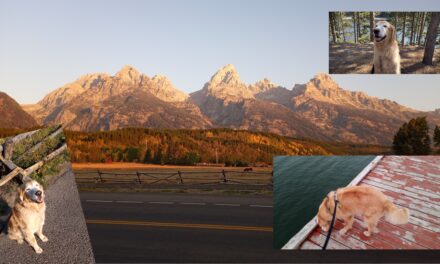